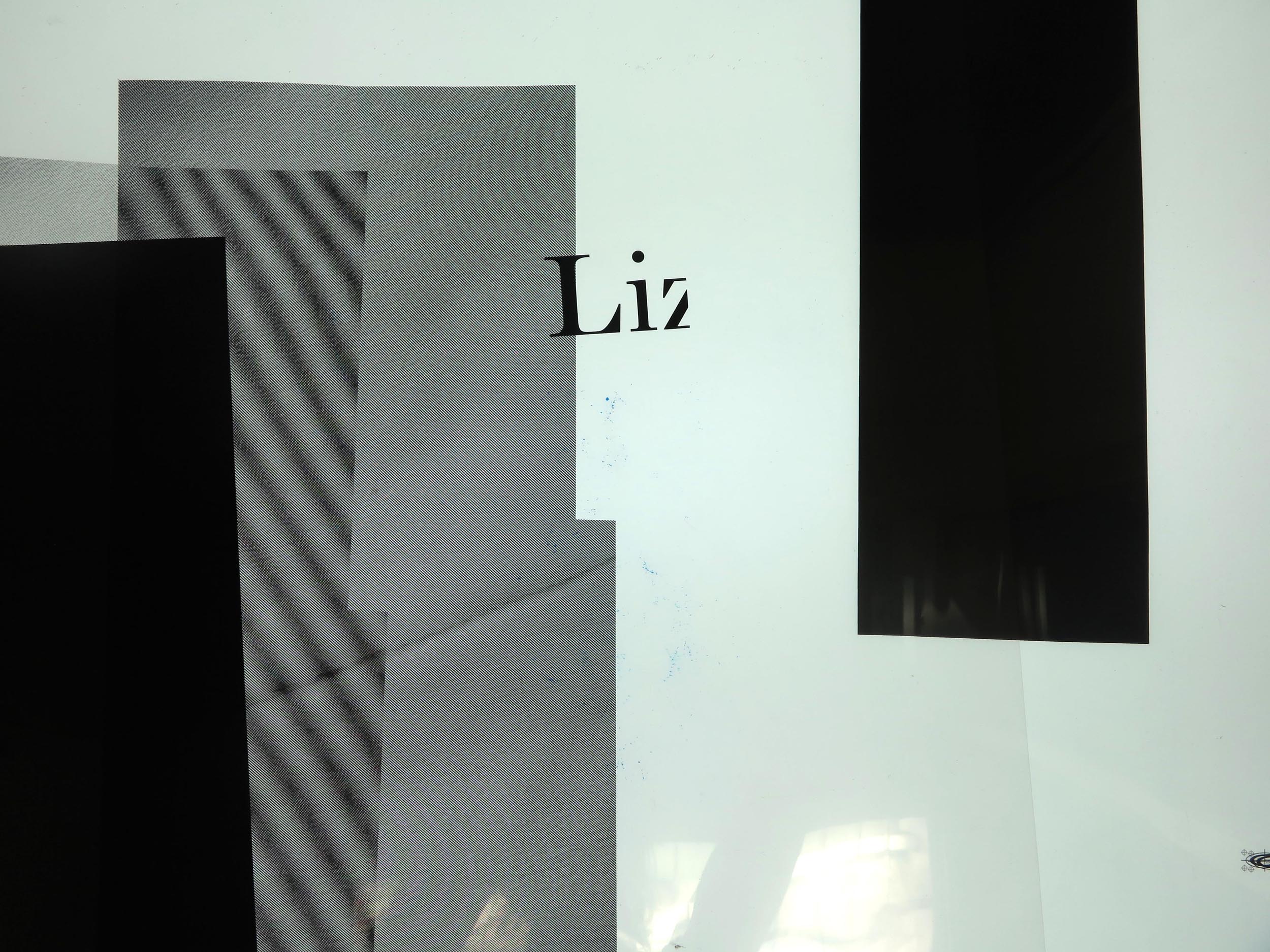 Published and printed by Negative Press. 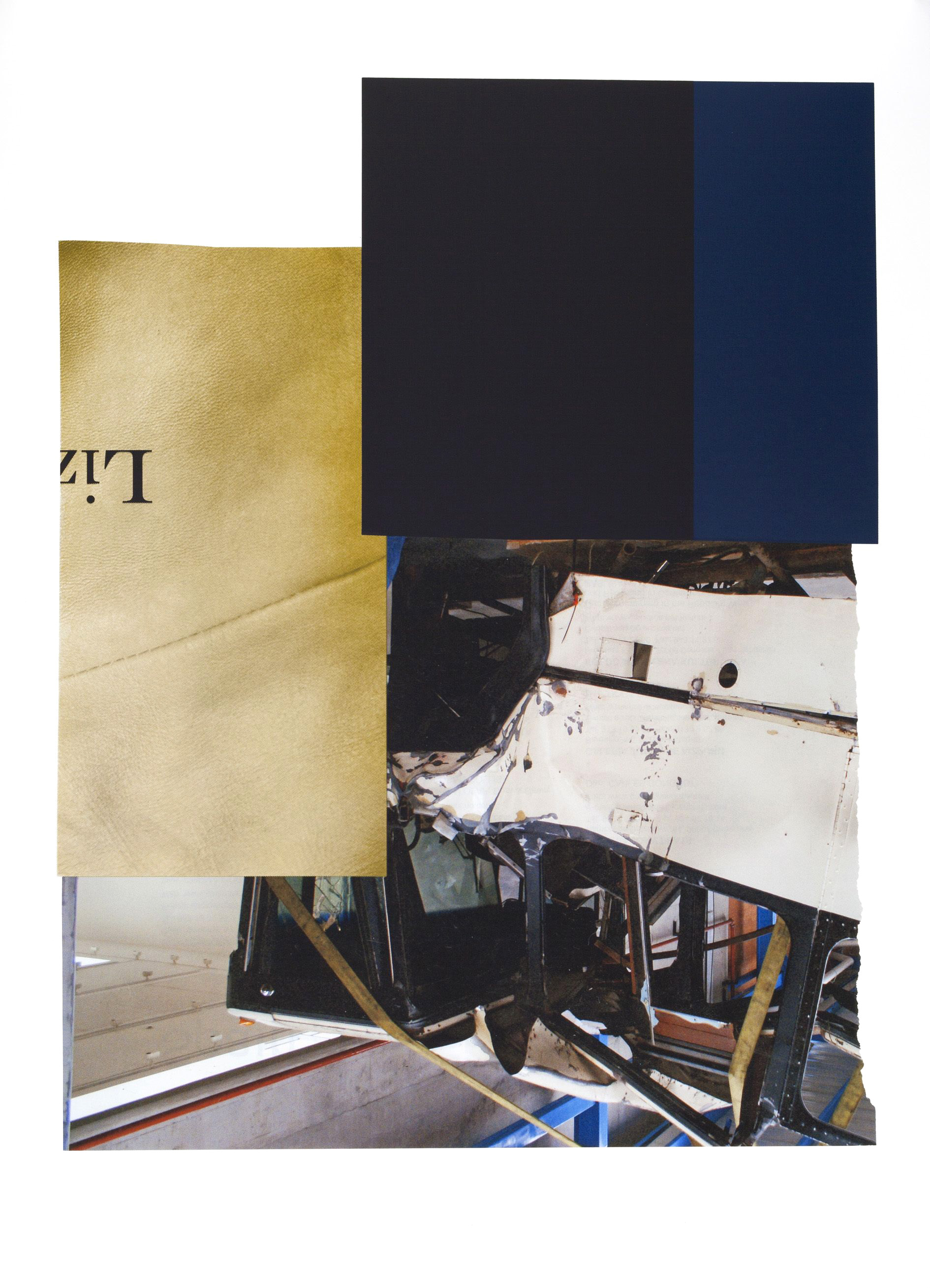 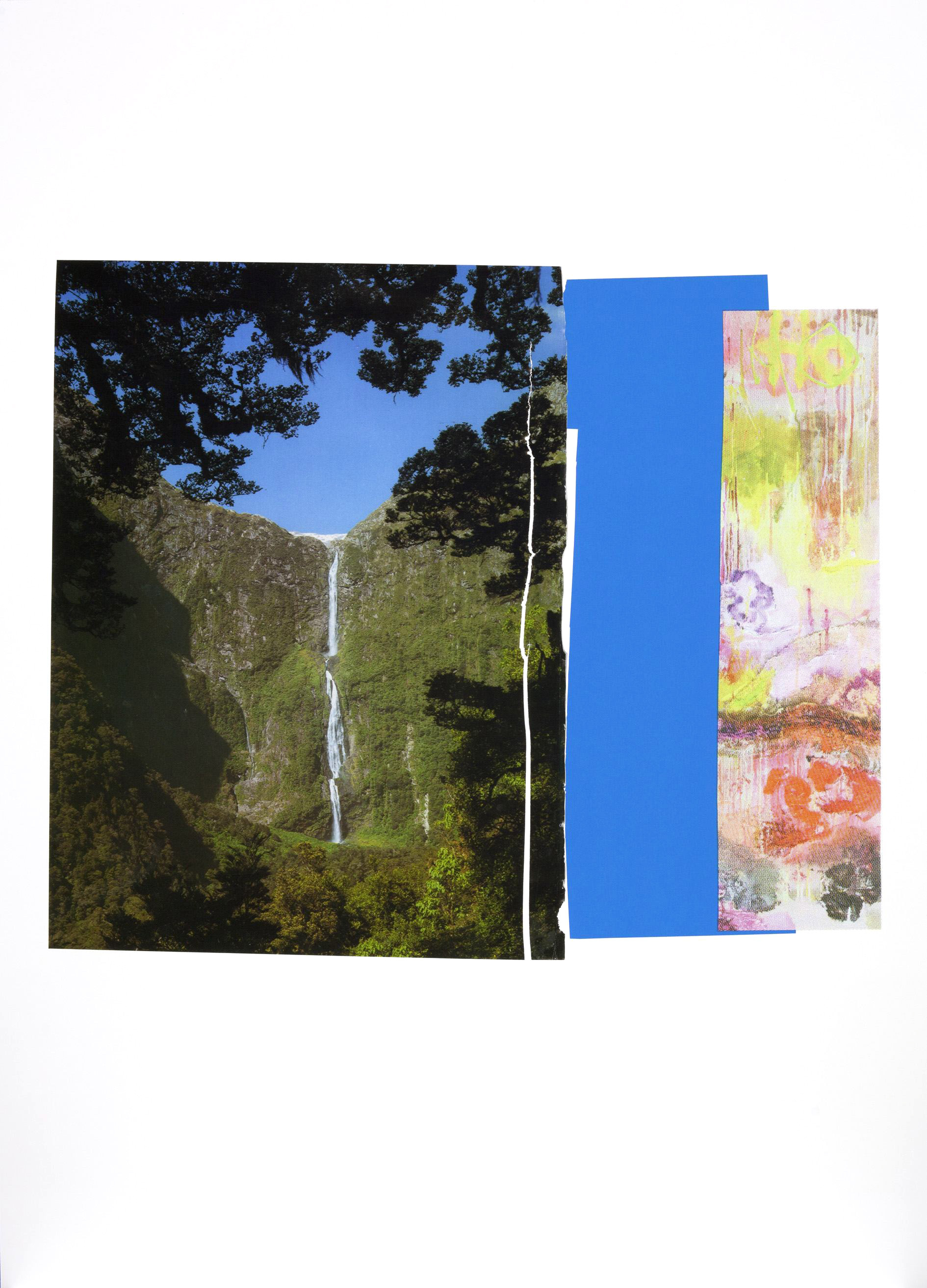 The lake is a large tranquil eye. The lake takes all of light and makes a world out of it. Through it, the world is already contemplated, already represented. It too might say, ‘The world is my representation of it.’
Gaston Bachelard, Water and Dreams1

Water in Elizabeth Newman’s work, Untitled, 2013, is never beginning, never ending. A waterfall goes up–down between cliché and colour field; both sublime and vacant. The work bounces back and forth between beauty and its displacement, like the reflection on that monochrome of the lake’s surface.

The print, which began as a collage, recalls Newman’s earlier work Beautiful, 1989. In both, a plane of flat colour mimics the blue sky or water of a landscape, irresistible but so easy-come (appropriated from some lifestyle magazine). The monochrome leans towards that iconic and spiritualist International Klein Blue, coined by post war avant-gardist Yves Klein. But Newman handles modernist tropes with a complicated fondness, a handling paralleled in the work of Ulla von Brandenburg.

Von Brandenburg’s 2008 exhibition Whose beginning is not, nor end cannot be at the Irish Museum of Modern Art, Dublin, featured her film 8, 2007. Encountering the work, you first pass through a warren of eight monochrome scrims. The film itself is a tracking shot, stretching out and stalling like Newman’s strips of colour, it moves past several tableaux vivants of characters holding affected poses. Their artificiality rubs against the silent interiority of the work. The film begins again, seamlessly. And then there are the monochrome scrims again on the way out, opening and closing the work with both depth and surface.

In Newman’s Untitled, 2013, a painterly neon shred of another artist’s work joins the equation, a peppy third wheel. Someone else’s previously finished painting becomes unfinished; it loses singularity and returns to its potential as means rather than end. Collage constantly re-distributes meaning through the rearrangement of its parts. Here, determined markers are returned to doubt, in a freewheeling dance of signifiers.

The easy immediacy of collage is put through the many-layered labour of printing. Through this flow and stall of process, Newman’s prints navigate a very particular temporal terrain. A kinetic stillness disassociates the images from their origin. Breaking temporal flow through repetition of print, the stilling causes a transformation. As John Kelsey writes, ‘Sometimes, the only way to change is by doing something over and over again.’2 And we’re back at the waterfall.

There’s no need though to labour the exchange between collage and printmaking since mediums are in constant exchange in Newman’s practice. This is collage made print as painting. Kelsey again: ‘we could visualise the constant exchange between collage and painting, as a motor that never stops turning over, with the readymade as a kind of driveshaft at its centre’.3 To which we can add printmaking. Mediums loosen up as they rotate around the readymade, constantly inferring and then embracing each other. Newman takes the opportunity to unfold subjectivity in the language of painting.

Newman talks about the lack of space for the subject in art today. Helen Johnson recently summarised this contemporary condition as having moved from ‘subjective universality to abstract individualism’.4 The shift has gone hand in hand with the late-capitalist conditions of labour, which are no more present than in the art world. Ours is after all a labour that is infinitely flexible, largely placeless, or at least highly transportable, often contingent on personality and indifferent to work hours (overtime doesn’t exist, it’s just time). Most importantly here it coopts dialogue and laughs in the face of our optimism for a radical fluidity. Newman has written of the way words spoken in the studio visit enter the press release and become calcified in the catalogue texts, over and over like rock strata. How can one talk when all utterances, all critiques, all discourses are so quickly appropriated for capital and the institution? It seems so obvious now that the most politically potent stance to take is silence.

Newman’s words on her own work are sparse. In a recent lecture at the Victorian College of the Arts, she spoke of the divided subject—constructed via language and divided within herself—and its inability to denote the meaning of the new signifier (the artwork) she created. In the same lecture Newman pointed to the debasement of language in contemporary conditions and with it the reduction of the subject to a unit. This reduction, and consequent violence against the subject-as-unit, is sometimes called collateral damage.

As a euphemism for acceptable, unintended casualties of military action, the phrase collateral damage protects us from the actual fatality. This abstraction of the corporeal empties the words that instead define a space between intended target and unintended target.

In Collateral Damage, 2013, the twisted metal of a bus crash, in a colour magazine clipping, comes to rest against the blue–black bruise of a monochrome and a section of fleshy leather superimposed with the letters ‘Liz’. Newman stamps the beginning of her nickname on the skin of the work reminding us of the subject, that unintended target. The work refuses to produce static meaning—content that can be shared and collected and distributed by economic currents. It allows only the endless falling of meaning that the subject arranges within herself.

In Paul Valéry’s words, a poem is ‘a prolonged hesitation between sound and sense’; a gap between form and content.5 The gaps are both formal breaks and spaces where previously fixed signifiers have detached from their chain of referents. This unmeeting, which Giorgio Agamben calls an ‘endless falling’ and Valéry named his ‘starting point’, is silent potential. Newman re-opens appropriated imagery in a constant return to means rather than ends.