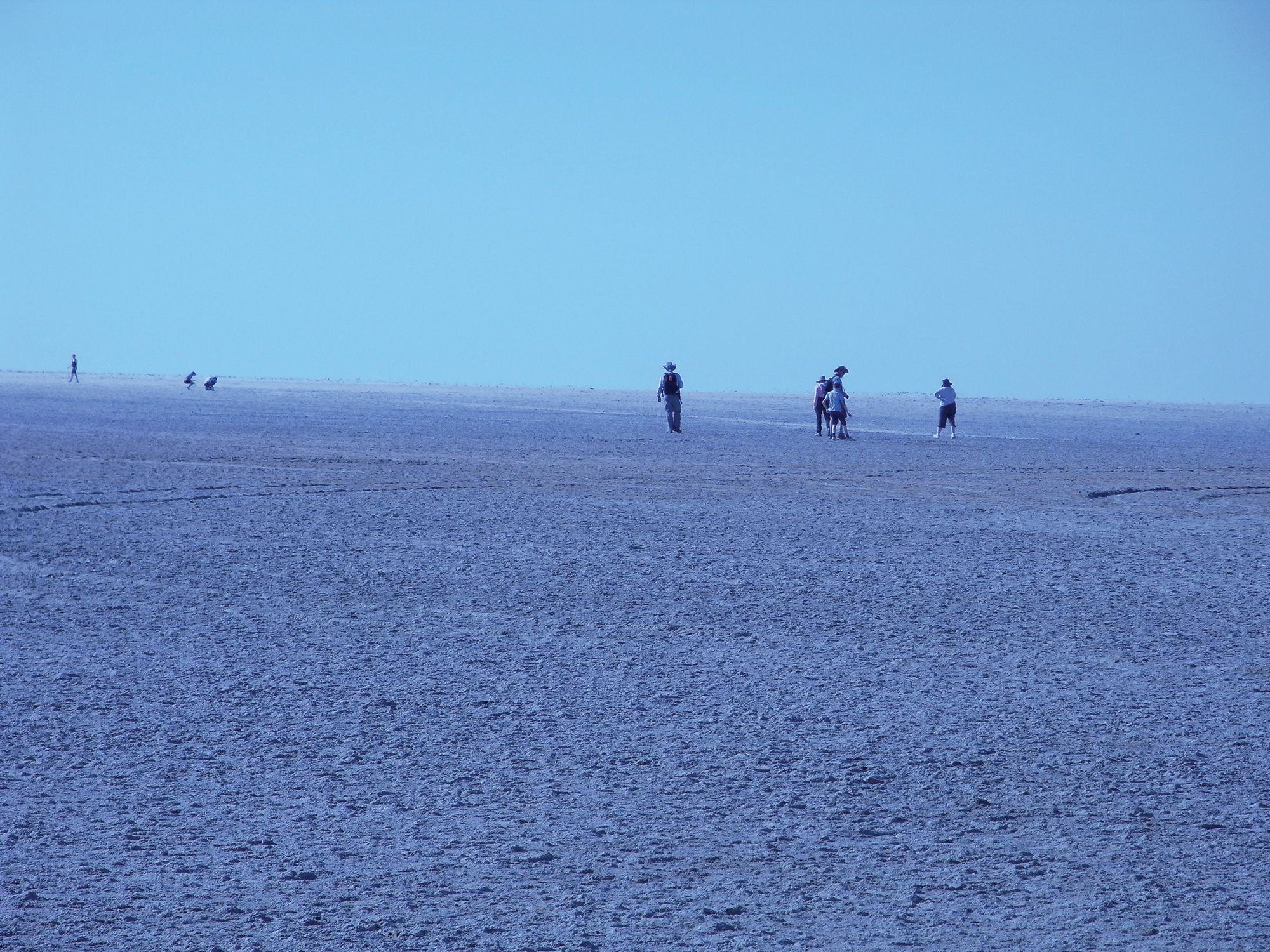 A series of four screenprints

Printed and published by Negative Press. 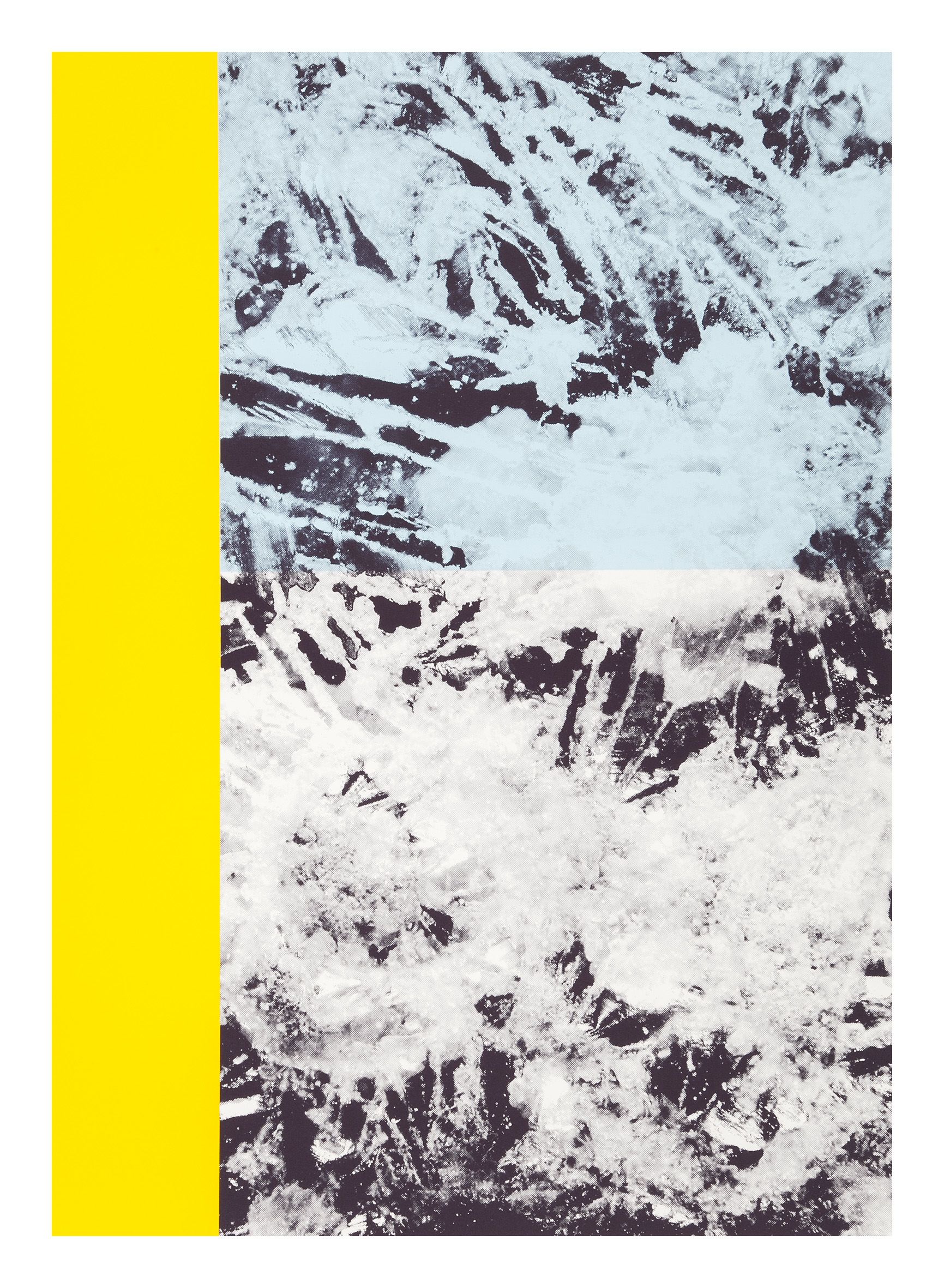 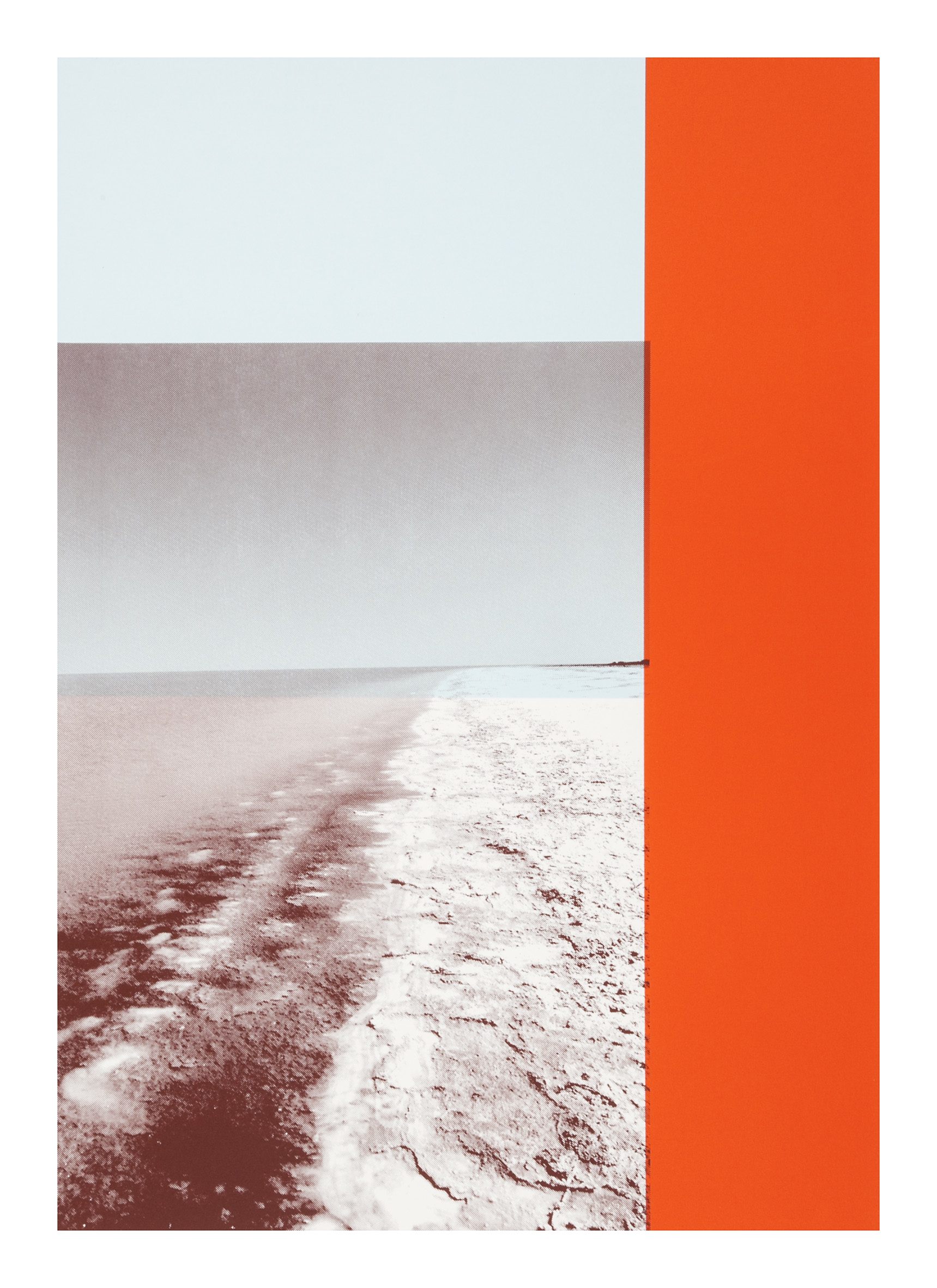 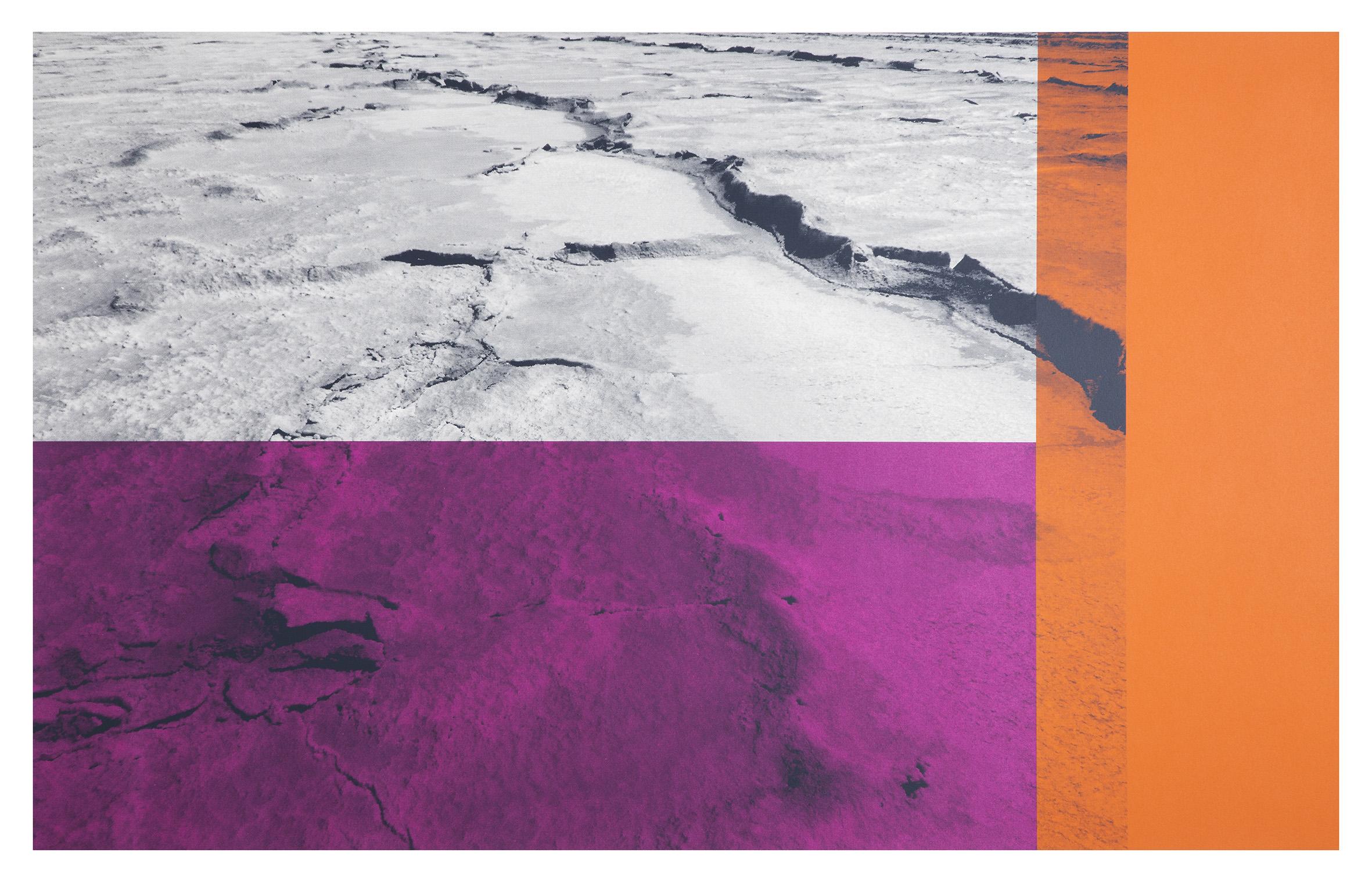 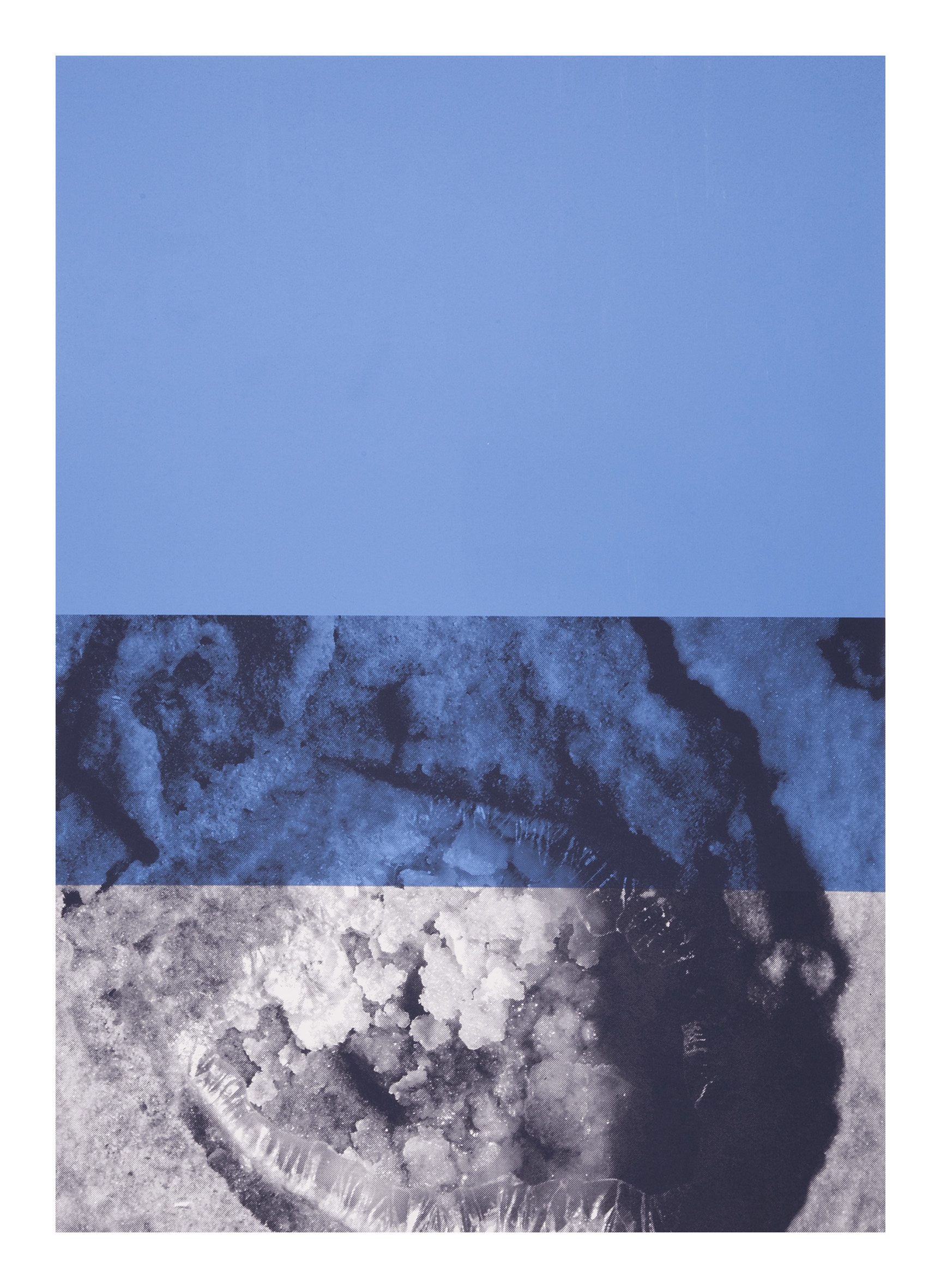 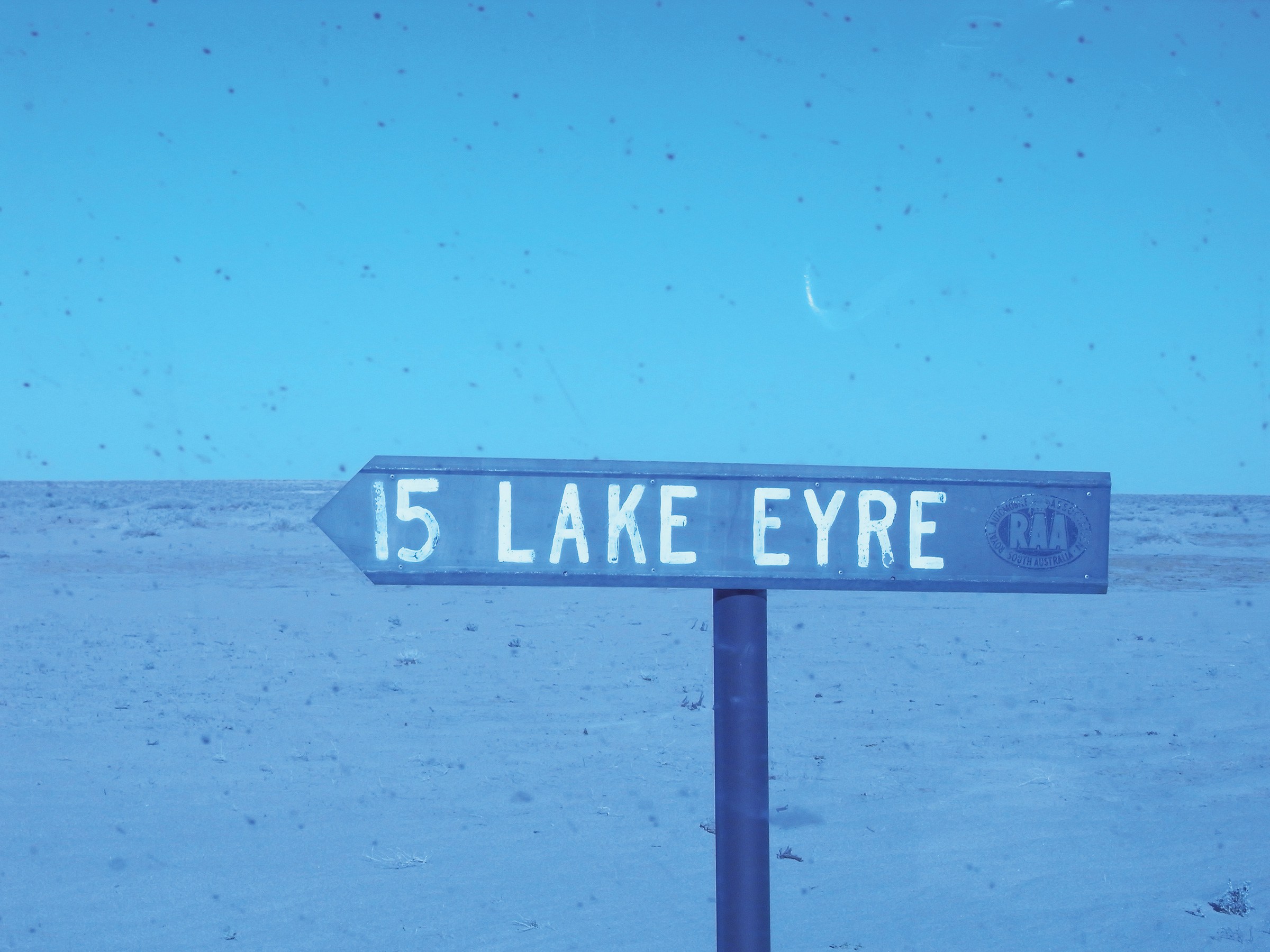 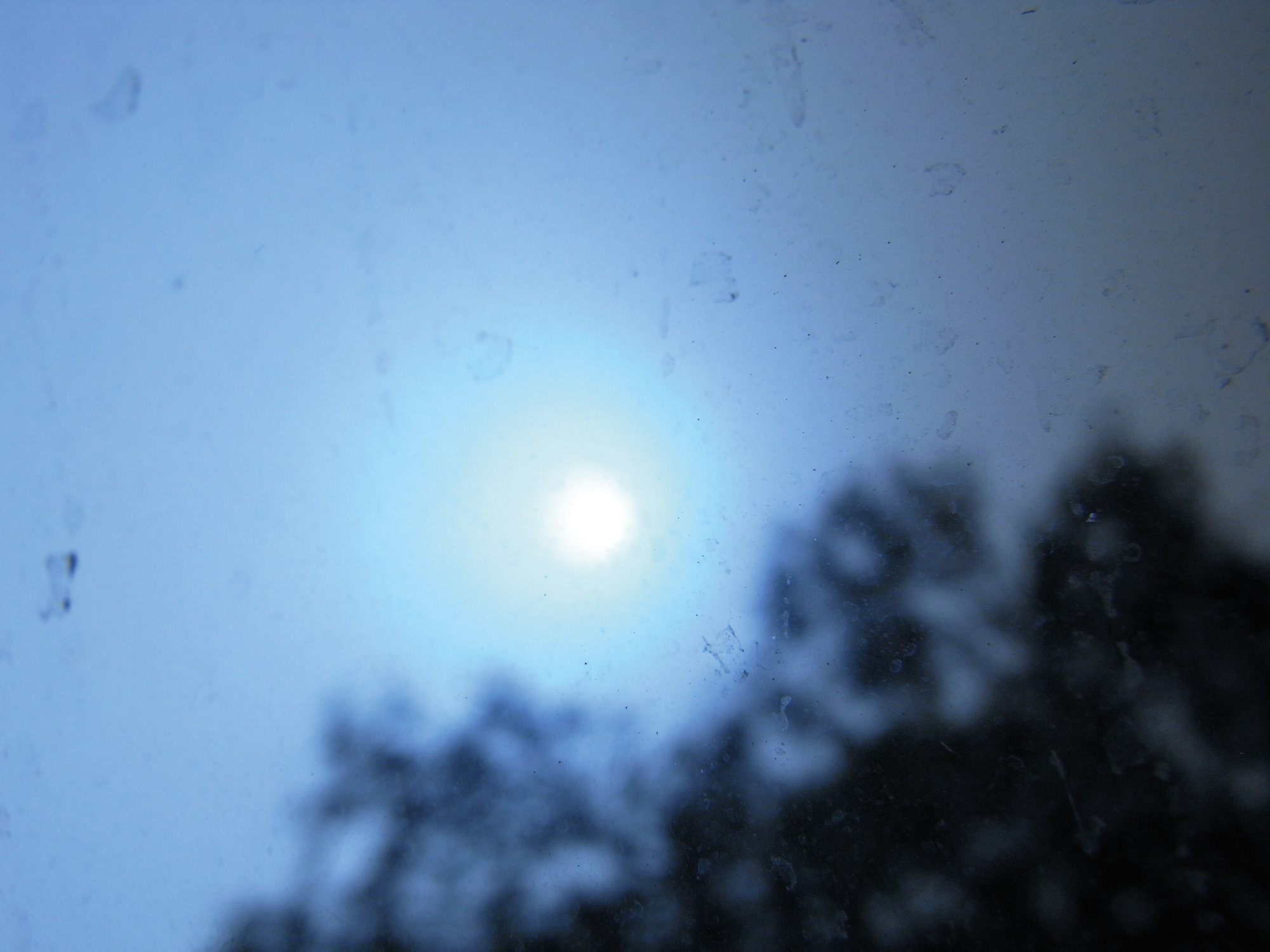 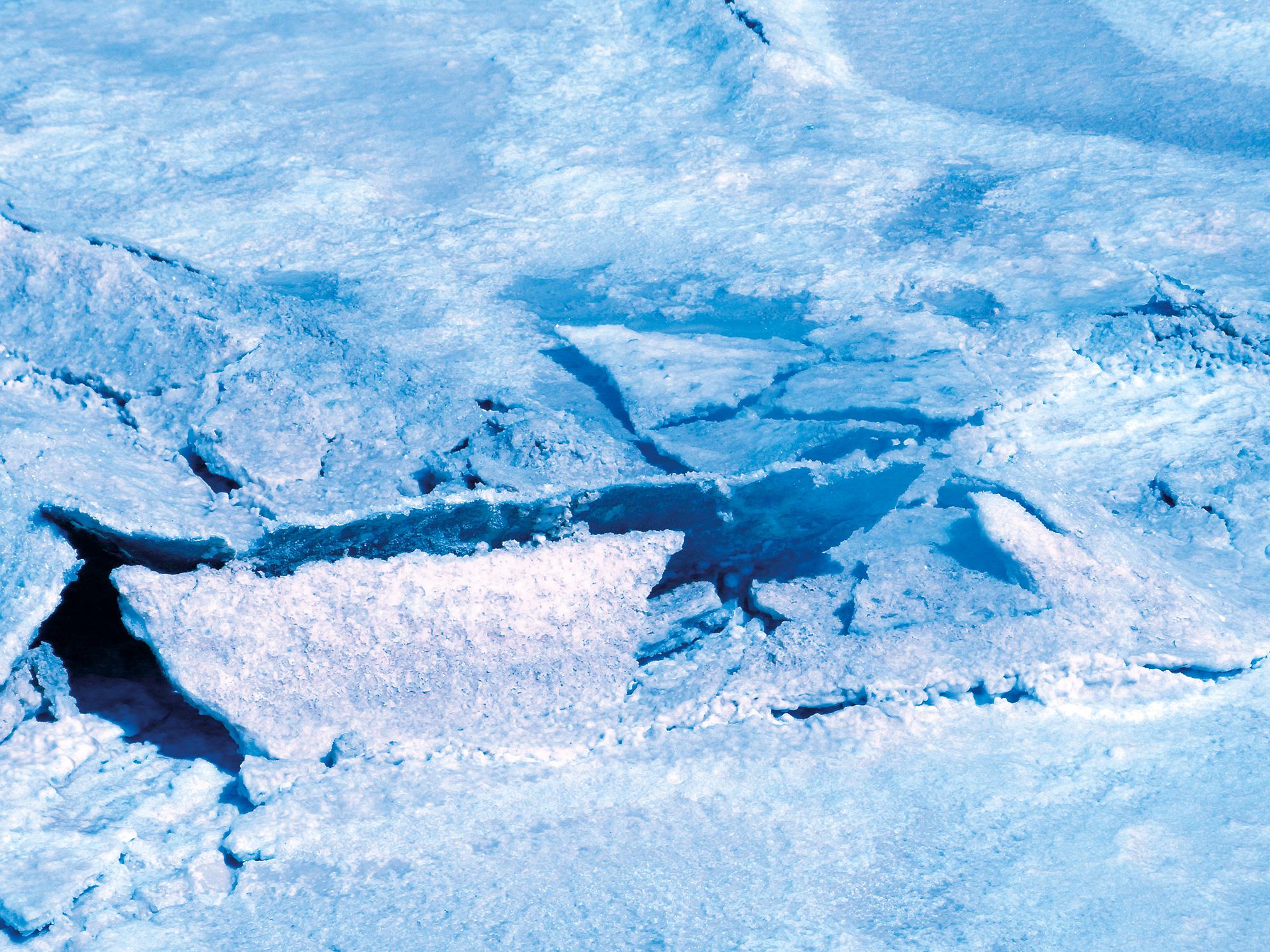 In September 2009 Anna Ephraim hired a Landcruiser in Melbourne and drove northwest towards the South Australian town of Wirrabara, where her uncle had retired. She stayed overnight while he ran her through a handful of essentials: how to engage 4WD on the vehicle’s front hub caps; what to expect when she ran out of sealed road; the basics of changing a tyre. He also explained the universal safety precaution for solo travellers: always tell someone where you are going, and when you expect to be back.

Ephraim’s ultimate destination was Lake Eyre, the vast interior salt lake, usually dry, that has long been a quasi-mythical emblem of the arid beauty of Australia’s ‘unpeopled’ centre. Like it does for most, this landscape had always seemed to Ephraim almost alien in its unfamiliarity. She had heard stories from her mother, who had been a remote-area Jillaroo in the 1960s, but growing up on the New South Wales Central Tablelands Ephraim had been surrounded by rolling hills that had been stripped of trees by settlers and then denuded by generations of farming. This was the well-ordered space of colonised Australia: what was once wilderness long-reconfigured by low-level human industry; divided neatly by boundary line and road.

After school Ephraim replaced this landscape with that of the city, studying art in Newcastle before relocating to Melbourne in 1999. She took a studio in the famed Nicholas Building and a job at a bookshop. For the next decade she fitted art making in and around the rest of her life.

In 2009 she read that Lake Eyre was in flood, a rare occurrence that draws flocks of birdlife to the lake’s shores. Ephraim, who had most recently been making small sculptures of the extinct parrots held in storage at the Melbourne Museum, was immediately intrigued by the promise of teeming life that would disappear almost as quickly as it arrived.

Beyond that she felt the lure of an experience to push against the daily cycles of city life. What would happen if she dropped everything and went out there? What would she see if she did?

Driving inland from Wirrabara, Ephraim passed Quorn and then approached Hawker, each town getting smaller and seeming more desperate as she went. By now she knew that the Flinders Ranges should have been drawing into view, but they weren’t. In their place were the immense dust storms that over the next week would blow across the continent’s southeast, collecting as they went the iron rich soil that eventually cloaked Sydney in an apocalyptic red veil. Ephraim, barely able to see the road in front of her, passed the ranges without seeing them at all. What she could see appeared to be made out of clay.

The storms lasted for four more days, during which Ephraim holed up at Leigh Creek for a night and then Marree, the closest town to the lake. It was far busier than she had expected: when the lake floods, the town is overcome by travellers, mainly grey nomads winding their way slowly around the country in convoys of 4WDs and caravans. For the first few days everything seemed to be in lockdown due to the storms, which only heightened the strangeness of the place.

By the time the dust cleared, the sky was left an eerie-seeming bleached blue, as if all the particles had been cleanly stripped from the atmosphere. She began by taking a chartered flight over the lake’s southern reaches: Jackboot Bay, Belt Bay, Madigan Bay. Seen from above this area alone seemed huge, but in the distance the lake opened out even further: in the white haze she couldn’t see where it ended.

The next day Ephraim tagged along with a local tour guide who she had met on her initial wanders through town. She sat up the front of the mini bus and when they arrived at the lake she walked off alone, trying to get a sense of the isolation.

This was the southern-most shore. Although the lake was technically in flood, it was still dry around the edges: densely packed white salt that had covered anything in its path. The dust, which had appeared yellow when it was in the sky, had gathered in red drifts across the surface.

Ephraim began to take photographs on a digital camera her father had recently given her. She was drawn to the crystalline salt structures, which she took in extreme close-up, and to the views of the lake’s white surface reaching towards the horizon. The lake, she learned, was the lowest point in Australia: 15 metres below sea level. Although it had seemed that her travels had taken her inexorably upwards, the opposite was in fact true.

Standing in the geographic depression around her, the horizon closed-in almost imperceptibly: everything felt vaster than she had expected. She realised that you had to be there to understand the scale of the place, that this scale had a certain effect on the human body.

Something happened with the photographs Ephraim took during her visit. She thinks now that the camera’s white balance was off; that perhaps she accidentally set something she shouldn’t have, or didn’t set something she should have. Either way, the images were blown out, the contrast impossibly heightened by the volume of light that had flooded off the salt.

On her return to Melbourne she had planned a new body of work based on the trip. She made a handful of drawings, which she never exhibited, and then had her first daughter, Maeve, with her partner Warren Taylor. Family matters reset her priorities. It was only in 2012 that she revisited the images, and began to think once again about how they might become works.

She began by feeding them into a photocopier, enlarging them and in the process further emphasising the heightened contrast. At first these became simple collaged ‘sketches’: she used strips of coloured paper as counterpoints as she cut and arranged the images. Taylor, a designer, had recently been presented with the opportunity to realise a series of prints with Melbourne based Negative Press, run by the printmaker Trent Walter. It became clear that here Ephraim’s new works, which already possessed the graphic flatness of screen-printed images, might find resolution. Taylor helped her to further adjust them digitally, pushing them closer to the Benday dots they would eventually become as printing screens. Walter lent his own expertise: a series of images began to take shape.

The resulting works have an effortless quality that belies, to some extent, the length of time the images themselves trace. Printed in monochrome they are offset by flat planes of colour, their compositions arranged with the simplicity of building blocks. Yellow butts up against blue here; elsewhere orange, against purple.

The colour scaffolds the images of the lake. The details of the salt crystals are hard to read but seem more bodily than abstract. The views of the horizon push uncomfortably against the surrounding flatness, a tension that holds the eye.

Making them, Ephraim had to cast her mind back to being at the lake. She had to try to recall the strangeness of the place, the way that the natural colours had been heightened, the sense of scale and what that felt like. There was the yellow of the dust storms and the sunlight that glowed beneath them, the almost purple sunsets and the bleached blue sky that had emerged on her third day in Marree.

When I meet Ephraim at her home in Fitzroy, the works, as yet untitled, are still proofs piled on her kitchen table, waiting for final adjustments. Ephraim will make small notations, and will send them back to Walter, who plans to edition them in the coming weeks.

She expects the colours to change, here and there: the purple, although beautiful, is not quite right; the orange might be too intense; the blue not white enough. In a sense the works turn on colour: how much it can communicate in and of itself; how it might recall a place, distinctly or indistinctly. It needs to be just right. Ephraim, who knows this, is in no rush. She has, after all, held these images and the experience they represent for some years now. A few more weeks won’t make a difference.